I believe in Signs from God. That I just got one certainly colors my view. That it was the same sign as I got seventeen years ago just rattles me. While I’ve written about this before, there is a bit of my old history that you need to understand what happened this Yom Kippur.

Just after my Bar Mitzvah, after great Haftara reading, I was asked to do the afternoon Torah reading for Yom Kippur. In more traditional liturgy, this is Leviticus 18, the odd inclusion in the service which lists prohibited sexual conduct and other prohibitions like turning your child into a burnt sacrifice. In retrospect, it was not very smart of our rabbi to give me a NC-17 rated reading like that. It soured me, not for any one line*, but the entirety of the piece. It shattered my Hebrew school image of Judaism, and in the emptiness left I went elsewhere of a spirituality that worked for me. For many years, into my adulthood, I was involved in Taoism and Zen, not Judaism.

Everything changed on a summer study abroad program to Rome for graduate school when I had a dream. In the dream, a Hasidic rabbi and I were alone in a room freshly plastered, yet without doors. The Rabbi told me to fresco on the walls some passages in Hebrew, though he did not tell me what. Though I did not know how to read Hebrew at the time, I began to write perfectly, and even knew what I was writing: the Shema. As I got through the fresco of the third wall, somewhere in the middle of Haya Im Shmoah, the room begun to spin, and the letters spun upwards towards Heaven like a upside-down tornado.

I had never had a dream like it. It began a search for a place I would belong as a Jew. A year later, almost in the same place as the first, I had a second dream which told me a lot of where I would go. That place turned out to be a Jewish Renewal Congregation on Chicago’s South Side, Makom Shalom.

After my return, I wondered where the dream came from. Was it all original material? It took me a few years but I had an idea of its source. In the Yom Kippur liturgy is the stories of the ten Talmudic martyrs. One of these was the story of Hanina b. Teradyon:


His death was terrible. Wrapped in the scroll, he was placed on a pyre of green brush; fire was set to it, and wet wool was placed on his chest to prolong the agonies of death....His heartbroken disciples then asked: "Master, what seest thou?" He answered: "I see the parchment burning while the letters of the Law soar upward."(Avodah Zarah 17b et seq.).

By the time I learned that fact I was entrenched in the masters of Jewish studies program at Spertus, and could read that passage not only in english, but the original Aramaic. Shlomo’s Drash was born in the period, and for quite a while I was writing regualrly.

While I was faltering for a while before my mom’s death, as I wrote last time, her death killed Shlomo’s Drash, and in my anger towards God for taking her away, just about killed my motivation for anything Jewish. Then came this Yom Kippur, when God made absolutely sure I got the point. It started on Rosh Hashanah when a friend of mine was looking for people to do readings for the part of the Yom Kippur service she was leading.Without ever looking at the reading I agreed.

I looked at it Yom Kippur morning as I was getting dressed for services, and burst out crying. It was a poetic interpretation of the martyrdom of Rabbi Hanina b. Teradyon.


...He who will see this desecrated Torah avenged will make good, somehow, my dying I see the parchment burn but the Letters are soaring to their source You may burn a Torah But Torah will not be consumed You may kill Jews but the Jews will survive and serve witness to the Genesis-- patterns of creation and the Isaiah -- prophecies of hope. [ Danny Siegel pg 902 Kol Ha Neshama Mahzor]

When I got to services, I asked the friend who assigned the reading, if I had told her the story of the dream in Rome. She had no idea what I was talking about. Not to leave that to coincidence, while I wandering about, waiting for the doors to the sanctuary to open, there was a new display in this synagogue we were renting for services. It was a Holocaust torah, one of many the Nazis collected and stored when busy destroying everything else Jewish. It has been damaged to the point it could not be repaired, and so was on loan as a display piece. On the display was the words of Hanina b. Teradyon. 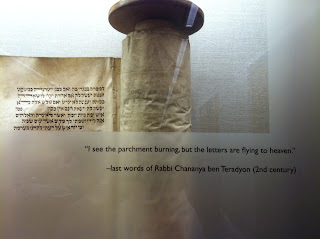 Maybe some will take this a coincidence. Maybe some will say it was my subconscious. playing tricks on me. I’m still of the belief that it was all too strange to be any of that but a sign from God. Like it did the last time, I was to return. As I got my seat and put on my talit for services to begin, I thought of the song that was popular at my renewal synagogue way back when:

Of course that was when services started with the choir singing, yes, Return again.

The song makes sense. The word teshuvah means not only repentance, but return. Nothing like a blatant message from God. So, unlike Jonah’s vain attempt at fleeing, I’m back, returning once again.

Don’t think I have much choice, unless I want more signs.

*Though Lev 18:22 would dog me for my entire adult life, cause some of the most serious swings in my life-path, and in ways I never would have imagined. But that's another story and another Drash all together.