Last weekend we had a discussion about Petitionary prayer in my Shabbat morning minyan. I said nothing in the discussion, though I had a lot to say. I was too busy trying not to cry. Here's why.

This week we read at the end of the potion, about Miriam and Aaron slandering Moses. Miriam takes the brunt of the punishment from God.

10 And when the cloud was removed from over the Tent, behold, Miriam was leprous, as white as snow; and Aaron looked upon Miriam; and, behold, she was leprous. 11 And Aaron said unto Moses: 'Oh my lord, lay not, I pray thee, sin upon us, for that we have done foolishly, and for that we have sinned. 12 Let her not, I pray, be as one dead, of whom the flesh is half consumed when he comes out of his mother's womb.' 13 And Moses cried unto the LORD, saying: 'Heal her now, O God, I beseech Thee.'[Numbers 12 ]

Moses' prayer, in Hebrew אל, נא רפא נא לה El na rafa na la is simple and to the point, "please God, please heal her" is all it says. I first learned it as an alternative Mi Shebeirach, the healing prayer at the first synagogue I attended in my return to Judaism. I've said it many times, many of those times last January.

Starting when I got a phone call that my mom was taken by ambulance to the local hospital I kept saying it, over and over again. I said it out loud when I could, I said it silently when I couldn't, on the road, at home, in the hospital when I was awake or lying in bed at night. I said El na rafa na lawhen we found out she needed emergency surgery for a rare condition that should have killed her already. I said it during her recovery, and when she slipped into a coma. I said אל, נא רפא נא לה when she came out of that coma, and when she slipped back into another. I said it until a few hours before her death when we were told it was hopeless, and my sister, Sweetie and I began our vigil to be with her at her last breath. 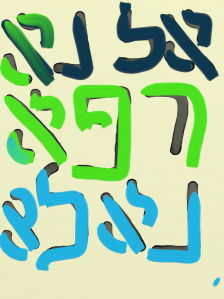 With my mom's passing our lives have been turned upside down. Our family is shattered by this loss and still trying to put the pieces back together. Grief does different things to different people, and all too often grief blinds us to another's grief. I once described grief early in our mourning as drops on a pond with ripples spreading out to others. When there is one drop in the pond there is little problem in understanding the concentric circular waves. But many drops in the pond produces confusing, conflicting waves.

El na rafa na la is a petitionary prayer. We ask for health and healing. I heard many things about petitionary prayer in our discussion. Much was condemning the frivolous petitionary prayer common in children praying for something for themselves, like anew doll or getting on the baseball team. It's selfish, most say, and not a good prayer. Yet I remember placing a small scrap of paper from my sketchbook into the Western wall and praying as hard as I could that would find my mate. I cried that day as Israeli jets flew over Jerusalem celebrating 60 years of independence. My mom shot a picture of me with tears still in my eyes from her side of the mechitza. A few months later, a freak snowstorm shut down the town Sweetie lived in at the time, and so she did something she rarely does -- go online. We started to chat, and that lead to everything else, including our upcoming wedding. Somehow that prayer in that little piece of paper is hard to ignore. It's hard to ignore that my mom did start to get better after all that prayer. She could have died that first night, but was with us for three more weeks, enough to let us say goodbye to her.

Interestingly this prayer ends with the word la meaning her. It is not writtenli meaning to me . The Cohanic blessing is in the second person. That prayer, expresses all the good things God may do to you, not me. IN that case maybe petitionary prayer does not work when it is selfish, when it is about me. Petitionary prayer does not work when I gain, only if someone else does. So one thought that keeps going around in my mind. I wanted my mom at my wedding. I wanted to see her joy at the day of my joy, one that has taken too long to come. Did all my prayer amount for nothing because my healing prayer had a selfish end? Since I wanted her to be joyous on that day, was it selfish? I don't know and the questions still dig at me.

I have many questions about what happened and the part prayer played. Prayer seemed to work then didn't. Should I have ever given up praying? Would she still be alive and another miracle would have occurred had I kept praying and not given up like everyone else? What if, as is likely that meant a very limited life for her? If prayer was just keeping her alive but in extreme pain, did I did the right thing by giving up? I did hear a voice while I was prying in those final hours say " stop. Let Go." I keep wondering about that voice and if I should have heeded it.

I also wonder the power of communal versus personal petitionary prayer. when she came out of the first coma and begin to have some function to her body, she had yeshivas praying for her, the second time, I'm not so sure who was. One synagogue I attend called me to find out my mom's status, ostensibly to take her off the mi sheiberiach list the day we found out the bad news she was likely to die. Does volume count in petitionary prayer. Does it count in healing prayer?

I keep thinking about how much I prayed those three weeks. I keep thinking how in the end it didn't matter, she didn't get better but died instead, and I'm left living in a shattered world. I prayed so hard and wasn't heard. She won’t be at the wedding, she won’t be there to support me, my bride-to-be, my sister or my father not just at the wedding but every day.

Does petitionary prayer work? Who I have become in large part because of my mom says in a still small voice "yes." My grief continues to shout "NO!" in the end I still do not know. I just know I hurt so much because she is no longer here.
Posted by Shlomo at 10:01 AM