This week we begin the book of B’midbar, known in English as the book of Numbers. While the more accurate name for the book is in the wilderness as the Hebrew indicates, the English is a reference to the census which starts the book.

1. And the Lord spoke to Moses in the wilderness of Sinai, in the Tent of Meeting, on the first day of the second month, in the second year after they came out from the land of Egypt, saying, 2. Take a census of all the congregation of the people of Israel, by families, by the house of their fathers, according to the number of names, every male by their polls; 3. From twenty years old and upward, all who are able to go forth to war in Israel; you and Aaron shall count them by their armies. [Numbers 1]

It is not the only time we have a census in this book. There is also one towards the end of the journey, immediately after the Baal-Peor incident is closed, and the people are ready to enter the land of Israel. They are bookends to the journey between.

45. So were all those who were counted of the people of Israel, by the house of their fathers, from twenty years old and upward, all who were able to go forth to war in Israel; 46. All those who were counted were six hundred three thousand and five hundred and fifty. [Numbers 1]
51. These were the counted of the people of Israel, six hundred thousand and a thousand seven hundred and thirty. [Numbers 26]

There is debate by biblical scholars what Elef, usually translated as thousand, means. There is a school of thought that it is actually some smaller unit of a company or detachment and the true number is less. Either way, there are 603,550 at the beginning of the trip and 601,730 at the end. The numbers themselves don’t matter as much as that they change. This journey is not a static one.
The people too change. The timid slave mentality of being provided for and believing they are weaker than anyone around changes into an effective, unstoppable juggernaut. The people on the east side of the Jordan are trembling in terror, as the spies bring back their report from Rahab of Jericho in the book of Joshua.
B’midbar is about change, and how the people change. It can be taken as a whole as an allegory of change, from a stupid idolatrous people to a people strong and worthy of worship of Ha Kadosh Baruch Hu. For one to worship Hashem, one really need to be empowered enough to believe they can. It requires a mindset like the Daughters of Zelophehad where even the rules as set down get questioned, not in rebellion like Korach, but synthesis, something no one completely submissive can do.
I think of this as I begin a new journey myself, Since the death of my mother, I’ve been in a wilderness too, wandering in this desert of emotion, where the water of life, joy, seems so rare. I’m two and a half months from my wedding as well. I’ve also lost my biggest client, and officially begin to take my professional life in a new direction.
It’s all scary, but the last two give me hope. I’m marrying the most wonderful woman in the world. I’ve know how beautiful she is for close to twenty-some years, when we first met in college. Her beauty is overshadowed by the person within though, and I am so blessed she will be my wife.
My professional life is yet to be set but the direction is clear. Almost thirty years ago, I ran across an ad for a new company called Electronic Arts. I remember the first time I saw their ad proclaiming CAN A COMPUTER MAKE YOU CRY?
The ad had a bunch of people who could be either rock stars or avant garde artists dressed in black. They were programmers. The copy was equally intriguing: 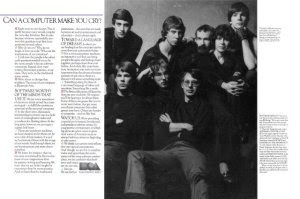 These are wondrous machines we have created, and in them can be seen a bit of their makers. It is as if we had invested them with the image of our minds. And through them, we are learning more and more about ourselves. We learn, for instance, that we are more entertained by involvement of our imaginations than by passive viewing and listening. We learn that we are better taught by experience than by memorization. And we learn that the traditional distinctions-- the ones that are made between art and entertainment and education-- don't always apply.

It went on like that, and it inspired me to get into software development and even write my first published program. I wanted to be one of those guys. They called themselves "software artists" instead of programmers. I got my BA in computer science because of that ad. I have the suspicion a lot of us did.
I found the real world, just as Electronic Arts found out, doesn’t share that vision. They sold out to a corporate mentality, and I found life behind the keyboard not what I thought it would be. So I ended up going into technical support, and from there to training and masters in Education. From there I went into foodservice sanitation training and took a hobby of biblical Hebrew translation into a master’s degree in Jewish studies. I took up drawing and painting. All the time I have been seemingly moving away from programming.
It takes a very unique person to blur the lines between art, education and entertainment. It takes a unique person to write anything that inspires the active imagination. I’ve been wandering for decades in another wilderness gaining those skills.
The closeness of the population data from the beginning of the journey to the end, only 1820 people, three tenths of a percent change in population, suggests something too. The stability of the population might also tell us how stable we really are. This may be about change, but paradoxically there really is little gain or loss in that change. It is all there in potential, we just have to release it. The guy Sweetie barely noticed in college is the same one she’s marrying in summer, though they might not seem the same. The journey I’ve been on did empower me.
AS the Israelites will find out in the coming portions of Torah the journey is not pleasant, but in the end, as I will definitely feel under the Huppa this summer, it is worth the effort.
Posted by Shlomo at 10:00 AM