Noah 5773: The Tower of Babel and the App Store

There is more to the world than the United States. That should be obvious, but events this week floored me into realizing it. What floors me more is that the very liberal, open-minded person that I thought I was could ever make that mistake.
This week’s Torah portion has two known stories, and that second one dovetails into my current thoughts so well: God becomes dissatisfied with all flesh on the earth, and thus plans to destroy them, saving one family, that of Noah, and a handful of animals. In the wake of the destruction that follows, God promises not to try that stunt again, using a rainbow for a contract. Noah, with a bad case of Post-Traumatic Stress, gets drunk and stupid. After the unpleasantness of this incident, a few more generations are born. With only a rainbow as a contract, these later generations don't completely trust God. They decide to make a tower to prevent this sort of thing from happening again.


5 And the LORD came down to see the city and the tower, which the children of men built. 6 And the LORD said: 'Behold, they are one people, and they have all one language; and this is what they begin to do; and now nothing will be withheld from them, which they purpose to do. 7 Come, let us go down, and there confound their language, that they may not understand one another's speech.' 8 So the LORD scattered them abroad from thence upon the face of all the earth; and they left off to build the city.[Gen 11]

Something about these verses interests me. God plans to confound their language, and instead scatters them. The text never say, that the people working on the tower first had their language changed and then were scattered. Genesis 11:9 seems to fill in that missing piece:

I’m not sure they weren’t simultaneous acts. I’d go as far to say God confounded language by scattering people. We are limited by our perceptions, and even more by our physical senses. These limitations create a situation where we tend to think locally. What is outside our local sphere of perception is ignored, the lesson I learned this week.
Among the other things I do, I’m a budding app developer. A friend of mine who is a public health educator had an idea for a counter for smartphone which would count the number of time one would wash their hands. I decide to explore the idea, and for the various festivities around the globe associated with Global Hand washing Day on October 15th, I’d give away the app as an educational item. I wrote the Handwashing Counter in about a month, and got it into the Apple App Store on October 11th. Unfortunately, as of this writing I haven’t heard from my friend, so I assume she never promoted the app. 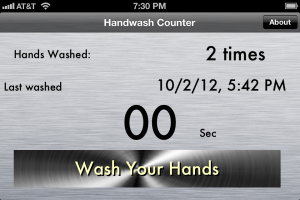 The marketing guru Seth Godin calls writing apps a sucker’s bet. The world is full of apps already. For you to be found in the top ten is not likely. If you aren’t in the top ten, you won’t make all that money you thought you would. I’m not making any money at this to be sure -- I’ve sold about 130 of my paid apps in the 8 months they have been in the App Store. I did not expect a lot from the hand washing app given my main promotional never happened. A week after introduction, there have been over 130 downloads of Handwash Counter, the most I have ever had for that period of time. There are now more downloads in a week than all the paid apps I have ever sold. But what got me was this: it was downloaded in 34 countries, yet only a quarter were in the U.S.
It was a shock to me, one that has got me thinking. The market is not the United States, it’s everyone else too. I had been thinking about one place, I was thinking local, when what I should have been doing is thinking global. God’s trick of making me distant from others got me. I did an analytics check on this blog and the numbers are extremely different. Two thirds of my shlomosnewdrash hits are US based. This blog is a lot of English. The average entry is about 1200 words. The Handwashing Counter app has very little in comparison. With a few localization changes, the app works anywhere. I’m planning to improve that. I’m going to add more graphics to the app in its next version, because I can see the less words, the better.
God split us up at Babel the story goes. Being too far away to talk or communicate meant variation came into the picture. In time that variation became different languages. But what happens when that barrier of distance starts to break down? A tweet I send right now is visible anywhere on the planet in a few seconds. We still have language barriers of course. The 18% of downloads by China and Russia require those users to know a Latin alphabet just to use the app. Yet 75% of my downloads was from outside the US. The Internet connects lot of people. With cell phones being the most common way in even developing countries to communicate, smartphones with web browsers are slowly becoming common in the most unlikely places. We are getting closer to all having a link to everyone else, if only we had a common language again.
Thirty years ago, Steve Jobs took some ideas from Xerox, whose executives thought it was not a profitable avenue for their company, and built an icon-based computer. The Macintosh led to the icons found in every program and app we use today. The idea that ancient languages had, of using pictograms as visual language, returned. In doing so it became so much closer to a universal language again. Those icons, buttons and sliders that make up my apps are still easy ways for people to understand things. It is a simple language. That I can transmit that anywhere is quite miraculous.
There is a bit of programming I do, actually mandated by Apple, known as delegates. Two parts of a program don’t talk to each other. In order to get them to talk, I have one program part, known as a class, have a requirement of what it thinks is communication, and the other class to do that part. If I want the communication both ways both classes need to have requirements and both need to make part of their code that requirement.
Babel was the time when we stopped communicating and started talking. We forget we need to be part of each other and know what that part was. We stopped having delegates to each other. The program, the building of a great tower, collapsed. God could have spread us half an inch apart from one another, but if we lose our ability to connect, we lose our ability to communicate. Even with the same vocabulary and grammar we can be talking different languages. This week I have hope we can connect. A little app showed me there is hope we can all communicate.
Posted by Shlomo at 9:11 AM