Shlomo's Drash: Through The Darkness 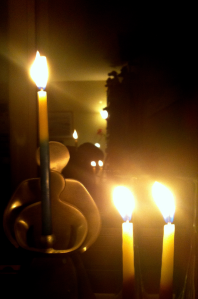 As part of Hanukkah the first two parts of the story of Joseph come before and during the holiday. In the first, we are introduced to Joseph and the two times he is flung into darkness.


24 And they took him, and threw him into a pit; and the pit was empty, there was no water in it[Genesis 37]

20 (K) And Joseph’s master took him, and put him in the prison, a place where the king’s prisoners were confined; and he was there in the prison.[Genesis 39]

In the next week, during Hanukkah, light dawns for Joseph:


40 You shall be over my house, and according to your word shall all my people be ruled; only in the throne will I be greater than you.[Genesis 39]

Hanukkah is the darkest of the dark, it uses the symbol of light to dispel the dark. all the winter solstice holidays do in some way do the same. While Christmas is always close to the solstice, Hanukkah moves to the lunar calendar. The middle of the holiday is Rosh Hodesh, a new month signified by a new moon. Hanukkah always includes the longest night with no visible moon of the year, hence it is the darkest of the dark, but in the days after, also the beginning of seeing light, just as Joseph had.
I've written before about the darkness of the time, most notably in my fable The Tzaddik of Klaas. This year was especially dark, and I felt the despair that Joseph must have felt while lighting the first candle last night.

Oddly, it was the following that made me realize something.
Now unless you too are a iPhone developer, you probably have absolutely no idea what I just wrote. I didn't two months ago. It is code to turn your iPhone screen red. Back in September, I started a project, a microscope camera app for work. The idea was for the app to be a companion to a product my company is making for the microscope. I developed the app, but with limited knowledge of how to program an iPhone, I used the easiest way to get at the camera. The problem is, it meant I had to write code for every button myself. That snippet of code is similar, though not the same as a lot of the code Iv'e written since then. Unlike many developers who are able to use the storyboard, a drag and drop way of building the user interface in a mere day, I was stuck coding it out for a month.
The code was grueling work. It was eleven hour days almost five times a week. I got to work in darkness and went home in darkness too many times to count. The work was exhausting and unsettling. Towards the end, I was in despair.
The app is done and in the submission process. I started to work on my next one and decided to use a few things I've never used before. Researching these new things, I was amazed how easily I understood them. Many of them used the same code I used for the red iPhone above. It was a clear as a sunlit day -- I understood them perfectly.
That shocked me, but it also was a feeling of enlightenment. I thought of Joseph and this time of year as I looked out to the street with all the people rushing about getting ready for the holidays. Joseph we are told started out as a real brat. Rabbinic tales in the Midrash make him out to be even worse than the braggart the biblical text does. Yet he changes so that Pharaoh would trust him with his kingdom. Maybe it was the darkness of the pit and the prison than changed him. Like I learned programming code, Joseph had to get through the despair to become cheerful enough to be of help to Potiphar and Joseph's jailer. That got him to be viceroy of Egypt.
The solstice holidays have always been at their root about getting though that dark despair of the season. The early church fathers and the Rabbis of the Talmud had a similar problem: people would celebrate the pagan holidays of Kalenda/Saturnalia and of the resurrection of Mithras, because getting through the dark is a deep human need. There is a story in the Talmud [Avodah Zarah 8a] that Adam just after his expulsion from the Garden of Eden was the first to be afraid in this darkness, what to him was the end of the world. When things got lighter and he celebrated. Both the rabbis and church fathers had to find a way to frame the solstice in their own terms. The church took the resurrection of a sun god Mithras and changed into the birth of the Son of God, who would be resurrected. The rabbis took the anniversary of the rededication of the Temple by the first religious zealots in history who invited Romans into Israel and illegally sat on the throne of Israel,(the Rabbis hated the Maccabees for those reasons) into a holiday of a miracle of light at the time of greatest darkness in the temple. After the solstice or the re-emergence of the new moon, we know we will live through the cycle one again, and into a successful year, like Joseph and my programming knowledge, into the light of success.
May your season, whatever you celebrate, be filled with light.
Posted by Shlomo at 7:32 PM